Adaptive Silverware for the Grip Impaired

Helping you regain dignity one bite at a time!

Custom Made Carrying Bags for our silverware made by Tchoup Industries! 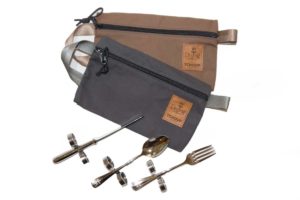 Designed for easy opening and closing

The story of Dining With Dignity Inc., a Williamsburg-based start-up that manufactures flatware for the manually disabled, has an unlikely beginning. .

It starts with tires screeching on asphalt, then a car tumbling end over end on Rochambeau Road. There are three people inside.

When the car comes to rest not far from the highway, two passengers climb out, examining their injuries — bruises, sprains, cuts needing stitches.

The third person doesn’t get out.

His name is Robert Bayton, and he has broken his neck at the seventh cervical vertebra, just below his shoulders. He isn’t dead, but from that moment on, he is a quadriplegic.

In the seven months of rehab that followed that day in February 2001, Bayton had lots of time to think about the life he had lost. Walking. Driving.

But most of all, he thought about eating. Bayton, who worked as sous chef for The Dining Room at Ford’s Colony in Williamsburg, loved fine dining more than anything else — and now he couldn’t feed himself.

“My wife and I enjoyed eating so much that it made me change careers,” said Bayton, who left a government position to attend cooking school at Johnson &Wales University. “Before the accident, we traveled to California and ate at the French Laundry, Bouchon, Patina, Charlie ‘Trotter’s in
Chicago. Instead of saying ‘We’ll go to Disney World,’ we’d say, ‘There’s a new restaurant in Orlando that’s gotten great accolades. I.et’s go there, and maybe if we have time, we’ll go to the parks.”

In therapy, Bayton found himself wondering if all that was over for good.

Even after he returned to his home in Williamsburg, he couldn’t seem to find any fulfillment in the restaurant scene. Having his wife feed him in public was humiliating, he said.

So he began to think about how he could change that.

“We’re fed by someone else twice in our lives – shortly after we’re born, and before we die,” Bayton said. “You’re very self-conscious about it if you can’t eat like others in a restaurant, because unfortunately people do like to stare. I was so self-conscious that I couldn’t really enjoy it.

“Technology has developed so many things for the disabled. You can type on the computer. They have something called drive—by-wire, where you drive with a joystick in your lap. But eat independently? There was very little out there. I thought, there has to be a better way.”

Bayton had a few things working to his advantage: a supportive family, lots of spare time, and most importantly, the partial use of his arms.

Bayton’s condition, an incomplete spinal cord injury, had not totally severed the cord — only bruised it. As a result, he retained control of his shoulders and arms but not his fingers or hands.

Utilizing movement in Bayton’s arms a therapist had been teaching him to dine using something called a universa1cuff. The cuff was strapped around Bayton’s wrist and contained a pocket that held a spoon or fork, allowing Bayton to shovel food from plate to mouth – although certainly not gracefully. Bayton wondered if he could improve on the technique.

He envisioned a real set of cutlery — nothing clunky or clinical, mind you · that would attach to his lingers at an angle, allowing him to guide food to his mouth without awkward arm movements. And it would be something he could slip on, bend and adjust by himself

One night, after dinner and a bottle of wine with his close friend Joe Janes, Bayton introduced his idea.

He introduced it to the right person. Janes, a longtime machinist and a manufacturing manager at metal fabrication company Advex Corp, in Hampton, believed he would be able to engineer the flatware his friend was describing. Immediately, he began sketching designs and looking for the right material.

Today, the silverware Bayton envisioned is not only a reality – it’s also for sale. According to the United States Patent and Trademark Office database, Bayton was awarded a patent for the design in May, and he now sells three-piece sets of retrofitted Oneida flatware for $55.

“Originally, there was never anything in mind to make a business out of this,” said Janes, who creates and attaches the special fittings for the flatware in his garage, then sends the pieces to Chicago for electropolishing. “It was something we joked about, but it wasn’t the goal at the time.”

Bayton used $45,000 of his savings to start his venture. He hired a patent lawyer, had a logo created, launcbed a Website and designed special
Packaging. He’s also traveled to trade shows across the country selling- and testing- the concept, and he reports having been approached by major health care products provider Sammons Preston Rolyan, based in Bolingbroole Ill.

But Bayton isn’t ready to sell his idea to the big guys yet.

“We still see trying to push it at a small level without any big corporation involved for about a year or so,” said Janes, who has a 25 percent stake in Dining With Dignity.  “There will be a time when we try to sell most of the rights to a company and let them take it. If (Bayton) feels the time is right, the time is right. I know one of the things that’s holding him back is he’s concerned that if he sells to the wrong people, he might get the financial support out of it, but not the involvement and be stuck at home without anything to do. He wants to make sure that he is an active participant in it in some manner, because now, this is his life.”

In the meantime, the pair is marketing the product to catalogs and examining ways to ramp up manufacturing so the flatware can be sold cheaply and in bulk.Bayton hopes to one day see the product used in hospital feeding programs for hospital feeding programs for people with arthritis, hand deformities, multiple sclerosis, Parkinson’s disease, Lou Gehrig’s disease -and spinal cord injuries  like he own.

But that’s still a long way off, Bayton said. For now, seeing the immediate results of his invention is enough.

“Every day, you never know when you’re going to lose your independence,” Bayton said. “The doctors save your life, put on their jackets and dtive away, but they’ve left someone who’s not functional in society. A disability takes away pieces of your dignity, so if I can give back some of that dignity, so be it.”