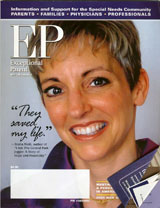 Bob Bayton was a successful sous chef in Williamsburg. Virginia when an automobile accident in 2001 left him a quadriplegic confined to a wheelchair with limited use of his hands.

After months of physical therapy. Bayton was able to return home and soon discovered he was unable to enjoy some of the things he took part in prior to the accident.

“Having been in the food service industry my wife and I enjoyed going out to fine dining establishments but it had become a chore and was no longer enjoyable.” said Bayton, adding the limitations of his hands made eating with normal utensils impossible.

He dreaded going out to public restaurants.

“There is nothing more degrading than being fed in public. He said. “’Technology has allowed physically challenged people to use computers and various appliances but nothing had been done no help people eat.”

Bayton decided to do something about it and Dining with Dignity was born. Bayton and his friend Joe Janes began experimenting with utensils that could be used by those with grip impairments.

°ln rehab, they gave you silverware that you use with a strap.’ explained Bayton. “You stick the utensil in the pocket of the strap and you kind of shovel food in. They‘re very clinical looking and l cannot put the strap on myself.”

Bayton found foam and other handles impossible to grasp. After trial and error, he and Janes came up with the solution.

“l wanted something that looked good and didn’t draw attention to you that was functional as well as adjustable.” he said.

The men manufactured an adjustable yoke ring assembly retrofitted on silverware with rings that fit comfortably over any two fingers The original design was to be used with the thumb and index finger. Bayton and Janes wanted to make it more versatile so they used a metal that allowed for unlimited adjustment. The yoke assembly, designed so the rings can be made larger or smaller to fit any individual’s hand sine or grip impairment, can be bent up, down, forward and backward.

The assembly can be restored to its original shape without damaging the rings so users can experiment with different configurations, finding which one works better. Because of this, individuals can fine-tune the adjustment at home without professional help or if they wish, family members or assistants can adjust them.

“They don’t necessarily have to be used on the thumb and index lingers,” explained Bayton. ‘Many people use it on the index and middle fingers. One individual who did not have a thumb configured the utensils for use on those two fingers.”

ln 2003. Bayton took the utensils to a national meeting of the American Occupational Therapy Association in Washington. DC. He went with only three prototype sets and the response was so positive. He knew he was on the right track. He received a patent for the utensils in January of 2005.

The rings allow people with special needs or grip impairments to eat independently. The utensils allow users to “hold”  them in a traditional position, which provides a natural eating motion.

‘The big advantage with the fork is that it allows you to stab the food instead of chasing food around on the plate and having to scoop it up.”

Due to requests to provide modified utensils for children. a smaller fork and spoon for children and individuals with petite hands was introduced by Dining With Dignity in late 2005. Bayton said he’s surprised at how beneficial it has been to children with cerebral palsy in giving them back independence in eating.

“It’s unbelievable how easily they pick up using the utensils. Many which have been led by someone else for years.’ Said Bayton. “For children who have never used utensils themselves. it also teaches them the more traditional way to hold them.”

Bayton frequents occupational therapy institutions, rehabilitation hospitals and special needs expos, spreading the word about his product. Kennedy Krieger Children’s Hospital in Baltimore. Maryland and Children’s Hospital of the Kings Daughters in Norfolk, Virginia are two institutions that have adopted the utensils as the standard for their feeding programs. Several colleges and universities with occupational therapy programs started including the utensils in their curriculum for assisted daily living aids. Most recently, Bayton was asked to give a presentation to an occupational therapy class at Ohio State University.

“l enjoy speaking to occupational therapy students,” said Bayton. “They are so eager to learn new technology and will carry this information forward as they enter the workforce.”

To learn more about Dining with Dignity, go to www.diningwithdignity.com. Dining With Dignity is located at l0l Deerwood Drive. Williamsburg. VA. 23l88.

“l know what these utensils have done for me – l know they work. It has changed my life.” said Bayton.